April 15th is the anniversary of the sinking of the RMS Titanic.  The story of the Titanic has captivated the curiosity of people for years.  In 1987 the Titanic was finally discovered along with its lost treasures. Included in the find was Titanic Jewelry.

RMS Titanic was actually considered as the biggest and most iconic ocean liner of her time. She started its maiden voyage on April 12, 1992, from Southampton, England to New York. But unfortunately, this trip didn’t end well. It was only after four days of her departure. That this opulent ship had a tragic encounter with an iceberg in the Atlantic Ocean at in the night. Soon after this accident, the ship broke in half and sank down causing the death of more than 1500 passengers.

Like most of the people, if watching the Titanic movie is your only experience with this incredible ship you are missing out. After all, the Titanic is not just about Leo and Kate.

In fact, it’s been more than a century, but the ironic history of Titanic still captivates us. It might be due to its tempting fate or the love story of the Titanic couple. But our fascination for this legend never dies. In addition to this, the recovered Titanic jewelry items from the shipwreck and other memorabilia are also a thing of interest. If you are intrigued with the history and romance of the Titanic you might want to look at Titanic inspired jewelry.  Renaissance jewelers have lots of such items.

Heart of the Ocean Pendant

All the Titanic movie viewers still remember that beautiful diamond sapphire necklace worn by Rose during many iconic scenes. Some believe that this necklace was just a fictional jewelry item only created for the film. While others think that there really was a blue diamond necklace on board. Which was a gift by Samuel Morley (a passenger on Titanic) to her wife Kate Phillips. And it sank down with the ship, still waiting to be discovered.

Despite this controversy, the subject Titanic is incomplete without discussing this alluring piece of jewelry. And the great news is, you can actually similar items at Renaissance Jewelers. In fact, we have one of the largest selections of tanzanites, loose diamonds, blue sapphires and blue diamonds in the Caribbean. Here is just one of our gorgeous pieces. 31.5 carats of tanzanite and 3 carats of diamonds.

Unlike Heart of the Ocean which was never discovered, a research team found some other precious items in 1987. All of them belonged to a purser’s bag who was traveling on the ill-fated ship. 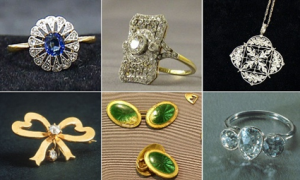 While we do not make exact replicas of Titanic Jewelry, you will find truly unique stunning jewelry for the romantic at heart.  Again, we have one of the largest selection of tanzanite stones in the Virgin Islands. Take a look at this stunning  Tanzanite ring.  I wonder if Rose would have dropped that to the bottom of the ocean too?